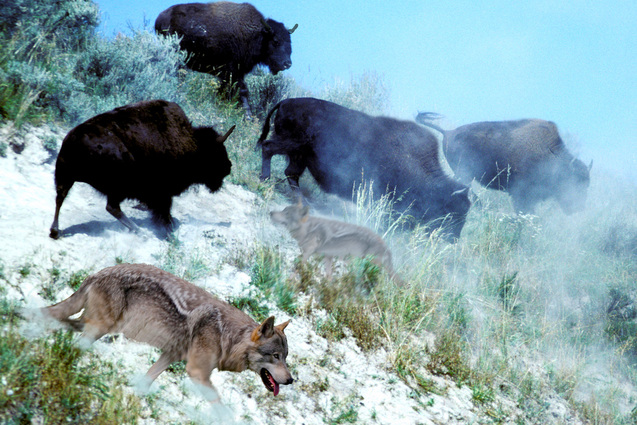 Think of the dire wolf as the American version of the spotted hyena. Although it was about the size of a modern wolf it was a much stockier and somewhat heavier built animal. Evidence from Rancho La Brea where over 200,000 specimens representing over 3000 individual animals have been found suggests that these wolves lived in large packs, perhaps exceeding 25 members.

Like modern hyenas they were capable of hunting large prey by running it to the ground but they were also capable of driving even a pride of lions or saber-toothed cats off of a kill. A determined pack would have been able to persuade a giant short-faced bear that it was time to leave its meal too!

Two races of dire wolves are recognized. The larger of the two was found in the west and Mexico. The smaller race was found in the central portion of the United States. Even though the smaller subspecies was 15% less in size it was still a large predator.

The dire wolf can trace its immediate ancestor to South America. Dire wolves evolved there and entered North America about 130,000 years ago. The grey or timber wolf evolved in Asia and entered North America south of the ice shield about 100,000 years ago. For a period of time the two species co-existed but filled different roles or niches in the ecosystem much as wolves and coyotes do today.
​
In the end it was the gray wolf that survived, likely because it was able to adapt to the new order of things after the mega-fauna vanished. Grey wolves have smaller more flexible pack sizes and can exist on smaller game such as white-tailed deer or less abundant species such as moose. Dire wolves with a need for ample carrion simply could not find enough food in this post glacial world.