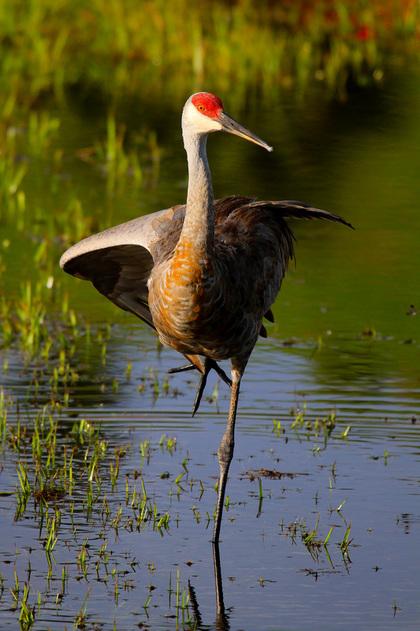 Western naturalists and birders are more familiar with Sandhill cranes than their eastern cousins. That is because these cranes are "typically" a western species. However, this crane is expanding its range and sightings in Ontario are now a regular occurrence as the bird has established nesting areas in the province. Sightings in the rest of the east remain rare.

Cranes are often mistaken for great blue herons. Both are about the same size and at first glance look similar. An easy way to tell a crane from any heron is to see it fly. Herons and egrets fly with their neck held in an "S" shape, tucked in against their body. Cranes fly with their necks stretched out.

Great blue herons are frequently encountered  along streams, marshes and rivers where they hunt for fish and amphibians. Cranes will forage in shallow water but their diets are more omnivorous in nature that a heron's. Cranes eat insects, aquatic plants and animals, rodents, seeds and berries. Unlike herons, cranes will form large flocks and migrate south and north together. As many as 10,000 cranes will rest in farmers' fields during their spring and fall migrations and their arrival has become a tourist attraction in many places along their routes. Such large aggregations are not seen in the eastern portion of their range.

An birder might encounter a great blue heron rockery with several pairs of herons nesting in a loose colony in the tops of trees. Sandhill cranes form breeding pairs and build their nests in shallow marshes using reeds, cattails and other plant material,

You are much more likely to hear a Sandhill crane than to see it. Mated pairs perform a "unison call" that carries for a long distance. Many times I've heard their "gar-oo-oo" calls and I have failed to spot the pair which may be well over a kilometer away.

Sandhill cranes typically lay two eggs which both parents incubate although the female tends to draw the night watch and overall spends more time on the nest. After about a month the eggs hatch and that day the young follow their parents on their feeding forages. For the first few days the parents feed their "colts" but soon the young can feed for themselves.

Many predators pose a threat to the eggs and colts. Coyotes, foxes, bobcats, mink, weasels, raccoons are all animals the adults will try and chase off. Often they are successful.

The young birds migrate with their parents and will spend the first 9 or 10 months of their lives in close association with them.

There are several subspecies of Sandhill crane, some of which rare. Of these the Florida Sandhill crane is one of the rarest with fewer than 5000 birds left. It is a non-migratory species.

Migrating Sandhill cranes fly in a "V" formation like geese but they will also ride the thermals like hawks and whole flocks can be seen as they are lifted, soaring in a spiral high above the ground.
​
​​Note: A version of this article first appeared in Bob Izumi's Real Fishing Magazine. It is used with the permission of editor. 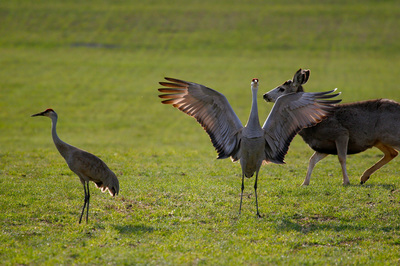 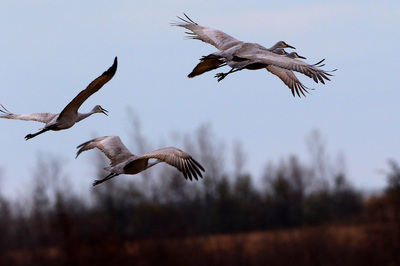 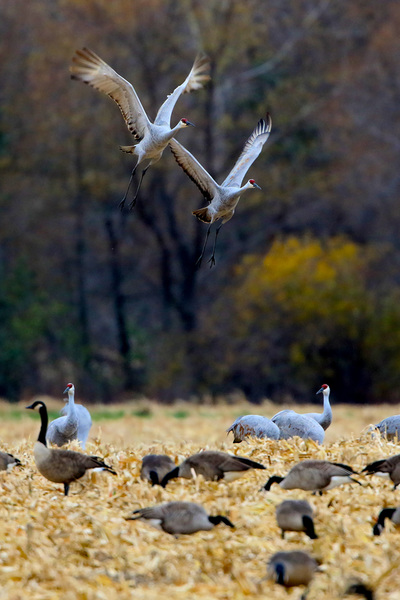 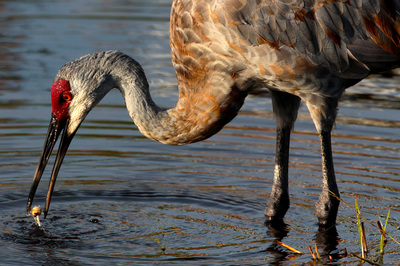 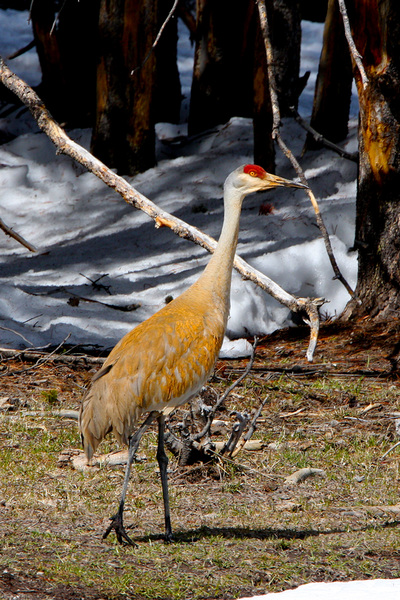