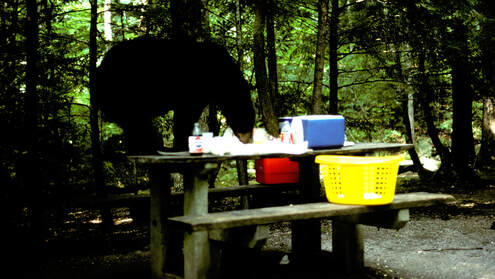 That was the day I met one of my boyhood idols; Jim Fowler. As a young boy I grew up watching Mutual of Omaha's Wild Kingdom with Martin Perkins. You have to be of a certain age to remember that show but each week Marlin would take the viewer out into the wilds someplace where he would engage with wildlife. He might wrestle an an anaconda, rope a zebra or capture a lion. Exciting stuff.  The show aired from 1963 t0 1988. Perkins was the host but from the very beginning Jim Fowler was there to share the load (Perkins was born in 1905). Fowler became Wild Kingdom's lead on-air host in 1985 when Perkin's retired due to health reasons, (He passed away age 81 the following year.)

The show was in first runs from 1963 to 1971 and then entered syndication. However new shows were added from time to time. Fowler, I recall, was featured in many of these shows and continued to share hosting duties with Perkins.

In July 1985 my growing family and I were on our way to Florida for a vacation and we stopped on the way down just outside of Great Smoky Mountains National Park. My wife opted to stay at the motel with our two young daughters while I drove into the park to photograph wildlife in the Cade's Cove area. To my delight I found a sow and cub in the picnic ground. I followed her around and got some good images. Then she went over to the picnic site in the image. That's when I met Jim.

It was just the two of us there and he was waiting for his camera man to setup the shot. Wild Kingdom was filming a show on black bears. Jim and I sat on a picnic bench and talked. I told him that I had seen him do a live presentation in the late 50's in Scarborough, Ontario. He was talking about African lions and presented some movies of his adventures. I was there with my Uncle Jack, an avid hunter, and my Dad (not a hunter at all). It was a great show and I really enjoyed it.

It was at this point that the conversation got really interesting. "You're from Canada? Marlin had a run in with a writer up that way." He named the writer who I knew vaguely as I was at the time a member of the Outdoor Writers of Canada (OWC). The writer, also a member of OWC, had written an exposé of sorts on Wild Kingdom (and other "wildlife" shows)  pointing out that many of the Wild Kingdom's action sequences with Perkins were staged. Then CBC produced a documentary in 1982 called "Cruel Camera" for The Fifth Estate. It looked at several nature shows and one of them was Wild Kingdom. Several staffers were interviewed and they alleged that many of the stunts where Perkins worked with a wild animal were setup. Perkin's denied it but the accusations certainly annoyed him. To say the least. However the show went on.

Setting up wildlife for filming is not something new but a naïve public were taken aback. I don't think that there was any cruelty done to the animals during the Wild Kingdom filming.  Probably more damage was done to poor old Marlin who had to wrestle the snake/bear/lion or whatever animal was the flavor of the week.  And now that I am of a similar age to Perkins when he filmed these shows I have greater admiration than ever for his ability to wrestle a gator!

However well Wild Kingdom may have treated its wildlife subjects the same could not be said for many of the other shows in the documentary, shows which I will not name here, but many of you would have seen them. One producer of another series gained notoriety by creating a large fenced paddock and populating it with bighorn sheep. Then he added a cougar to the mix. The footage was full of action. Sheep scattering. Cougar leaping. Sheep dying. It would be difficult to get away with tricks like this today. Public awareness and accepted ethics around working with animals would prevent it.

The controversy changed wildlife filming for the better. BBC Earth and Disney Earth are fine examples of what can be done with time, money, and talent although they still do use habituated animals or controlled setting in some shows. But these setups (such as kingfisher diving for fish) are not cruel or demeaning to the animals.

The revelations also effected my industry; nature photography. About that same time a western company that specialized in providing hard to photograph species such as mountain lions, bobcats and wolves became annoyed that a select group of professional photographers kept this business a secret. The company started taking out ads inviting anyone with the money and desire to book a session and the cat was out of the bag. Many well known magazines (really just about any magazine that ever featured a wild animal on its cover...yes including THAT REALLY WELL KNOWN magazine) were embarrassed when they were called to task for using an image of a wild supposedly free roaming  animal that was actually photographed in controlled conditions. Many well known wildlife photographers were caught in the scandal. (Well scandal is a little strong...most people could care less who took the picture or how...but it changed the business.)

I should note here that since then other companies have also been created which for a fee will let photographers photograph a variety of wildlife (mostly predators) in large natural compounds. Their ads appear in many Nature and Outdoor photography magazines.

As result of this negative publicity when you submit images for publication today you are expected to let the publisher know if they were taken under controlled conditions (CC). To be clear, there is nothing wrong with using these services as long as you honestly represent your images when you sell them.

I think these changes have helped both the video and still image industries improve their quality. (For more on this see SW Media Literacy)

About now the camera crew had everything setup. Now we waited for the black bear to put in appearance which she did. She dutifully climbed up on the table and began going  through the picnic lunch. (The picnic basket had been purchased from the family that owned if for $50 so the film could be made.)

I said my good-byes and headed down to my family. I found the hour I spent chatting with Jim Fowler to be one of the highlights of my life. He was a great story teller (as witnessed by his many appearances on The Johnny Carson show), an honest guy and proved that some times you can meet your idols and not be disappointed.

Oh yes...the episode on black bears show? Never saw it. Years later I briefly ran into Jim someplace and asked him about it. "Never got made. The camera guy set the ISO wrong and the footage was too dark." (I might note that I don't think he remembered me but he did remember the shoot.) 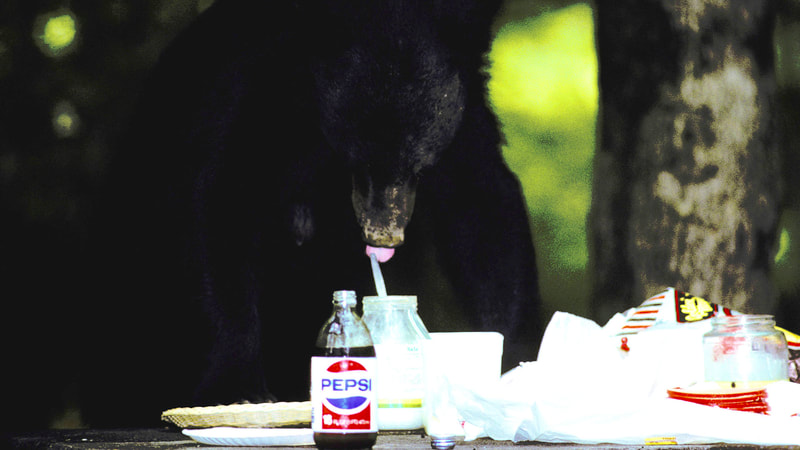 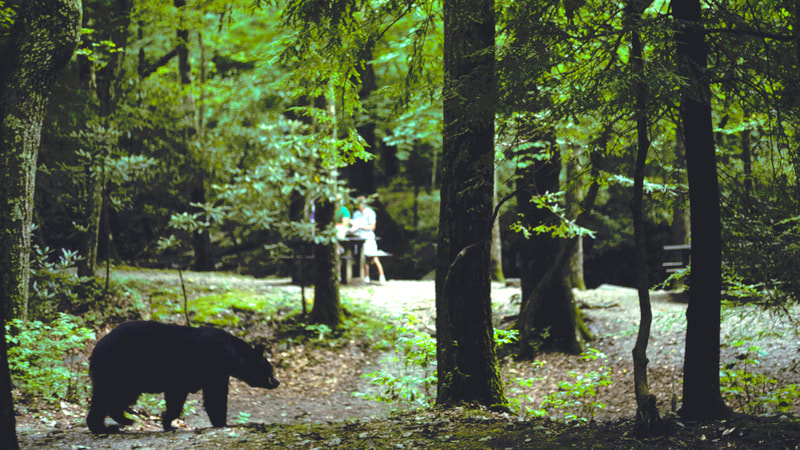 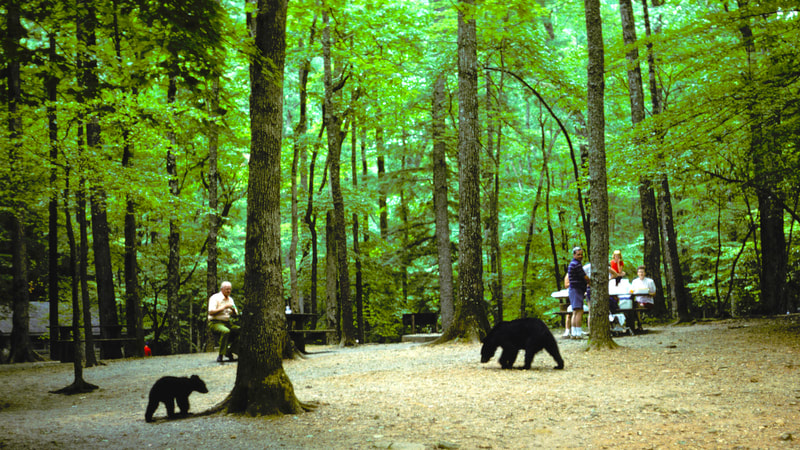