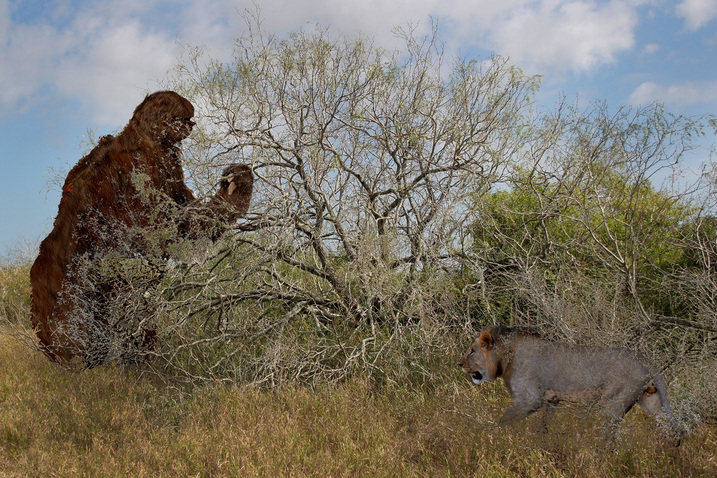 Perhaps, with the possible exception of the glyptodont there were no stranger invaders of North America than the giant ground sloths. Three species survived until the beginning of the Holocene Period. They were Jefferson’s ground sloth, Rusconi’s ground sloth and Harlan’s ground sloth. All ground sloths can trace their ancestry back to South America where like other invaders from that continent they followed their unique evolutionary route protected from carnivores such as the cats, wolves and bears.

Each species varied in its diet and body size but all were ground sloths. That is they were fairly large, cumbersome animals that sported long curving claws on their front limbs. All were large herbivores that possessed thick tails to give them support when reaching into trees for food.

Jefferson’s ground sloth (Megalonyx jeffersoni) was the most wide spread of these strange creatures. It was found from the Gulf of Mexico to the Yukon and Alaska. It is named after the second President of the United States, Thomas Jefferson. He was presented with fossil remains discovered in a cave in 1799 in a Cave in West Virginia. The bones seemed so recent that he was convinced the species still existed and even instructed Lewis and Clark in their exploration of the American west to look for the species and report back on it.

It was one of the largest species of ground sloth found in the North America. It was the size lf large bear or adult bison, roughly between 2.5 to 3.0 m long. Specimens from the south are smaller than those from the north. Most genres of ground sloths walked on the outer rim of their foot giving them a clumsy, almost crippled appearance but Jefferson’s walked on the sole of its hind feet. Like humans and bears it was plantigrade.

They died out around 9000 years ago although some smaller relatives continued to survive on a few Caribbean islands until more recently. There is evidence to suggest that humans hunted ground sloths and may have contributed to their demise. It is hard to imagine how these slow moving creatures survived the other predators of North America. American lions, sabre-toothed cats, giant short-faced bears, pumas and jaguars, wolves and dire wolves would all have to be counted among the sloth’s enemies.

No doubt their great size was a factor as was their long curved claws. The upright position they could easily attain was also a factor in intimidating would be predators. It made them look even bigger. Their behaviour might have also altered the odds. Ground sloth remains and dung have been found in many caves. Did they take refuge there at night?

Harlan’s Ground Sloth was found in open grasslands throughout North America. Grass, small shrubs, and roots were its preferred food. In addition to they typical ground sloth defenses it also has as protection against predators it had pebble-like bones imbedded in its skin.
Rusconi’s Ground Sloth grew to lengths of 4 meters (20)feet and weighed more than three tonnes. It was the largest Ice Age ground sloth in North America and preferred a savannah-like habitat of open grasslands dotted with trees.
​
Shasta’s ground sloth is the smallest known North American ground sloth. It is also the best known. Hair samples along with skeletal and well preserved dung found in caves in the American southwest have provided scientists with a good understanding of this species. Unlike the other ground sloths this species had a preference for forested and jungle-like habitats. It once extended its range as far north as Alberta. The contraction and expansion of its range over the millions of years the species existed is an indication of the expansion and contraction of its desired habitat as North America warmed and cooled during ice ages and interglacial periods. 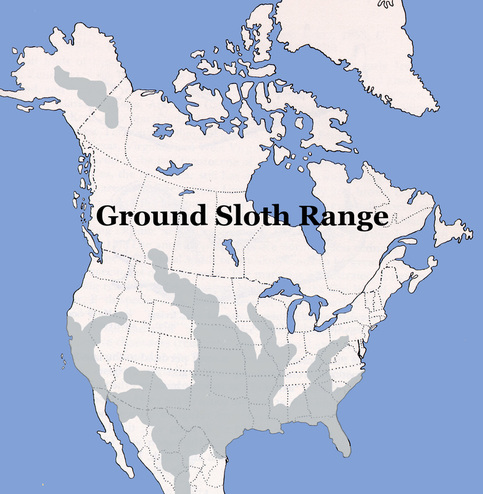 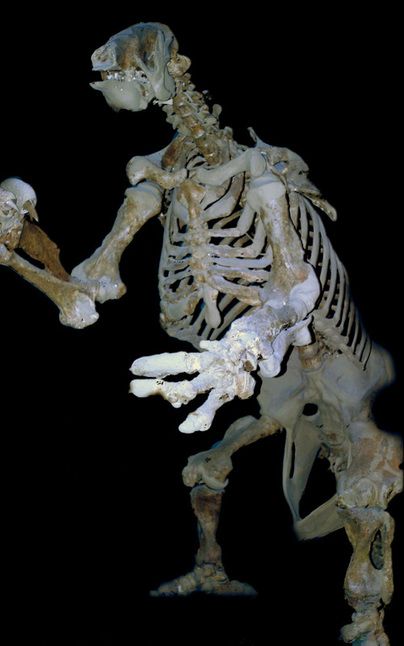