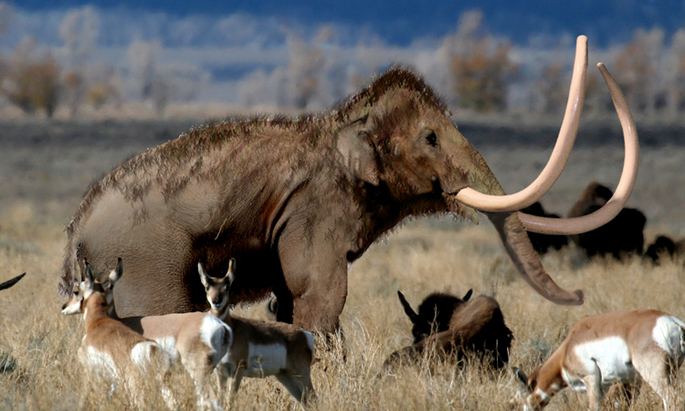 4m (13ft) tall at the shoulder and up to 10 tonnes in weight
​
The Columbian mammoth and the closely related Jefferson mammoth (they may have been in fact the same species) are distinctly American elephants unlike the Woolly mammoth which could be found in both Asian and North America.
The Columbian mammoth was one of the largest elephants. It stood 4 meters at the shoulder (13 feet) and tipped the scales at impressive 10 tonnes. By comparison a very large African bush elephant would reach 3.5 meters and a huge bull would reach 4 meters. Five tones would be a big African bull.

The size of a Columbian elephants tusk would really impress someone who is familiar with today’s elephants. The spiral tusks up to 4.9 meters are recorded (16 feet). Anything over 3 meters would be really impressive for a modern elephant.
It seems likely that while this species of mammoth may have possessed some body hair it was not covered to the same extent as its relative to the north. The Columbian mammoth was an elephant of the southern portion of the American continent. Here, even in the height of the ice age the climate was warm for most of the year. Likely it resembled a slightly hairy Asian elephant with its skin exposed under a thin veneer of hair.

It preferred habitat seems to a savannah-like mix of trees and grasslands. It is thought that one fruit in particular had a close relationship with this species. The Osage orange has a very tough skin and no living ungulate in North America is capable of crushing it let lone eating it. The assumption is that the fruit relied on these mammoths to eat the fruit and pass the large seeds out in their droppings thus assuring future generations of the species. Other foods included grasses and other low growing plants along with some browsing of leaves, twigs and fruit.

It’s social life appears to mirror that of living elephants. Upon reaching puberty around age 12-14 bull mammoths would leave the mostly female herds and wander on their own or with a few other males. The cow herds were probably made up of related females and their offspring.
​
There is direct evidence that humans hunted this species. Clovis points have been found embedded in mammoth bone. 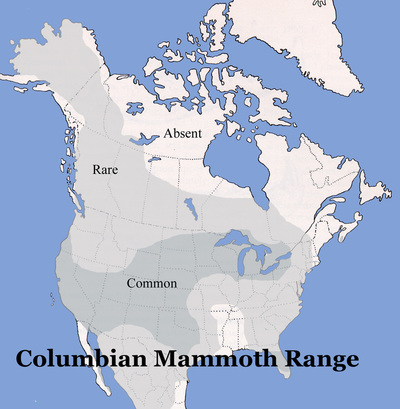