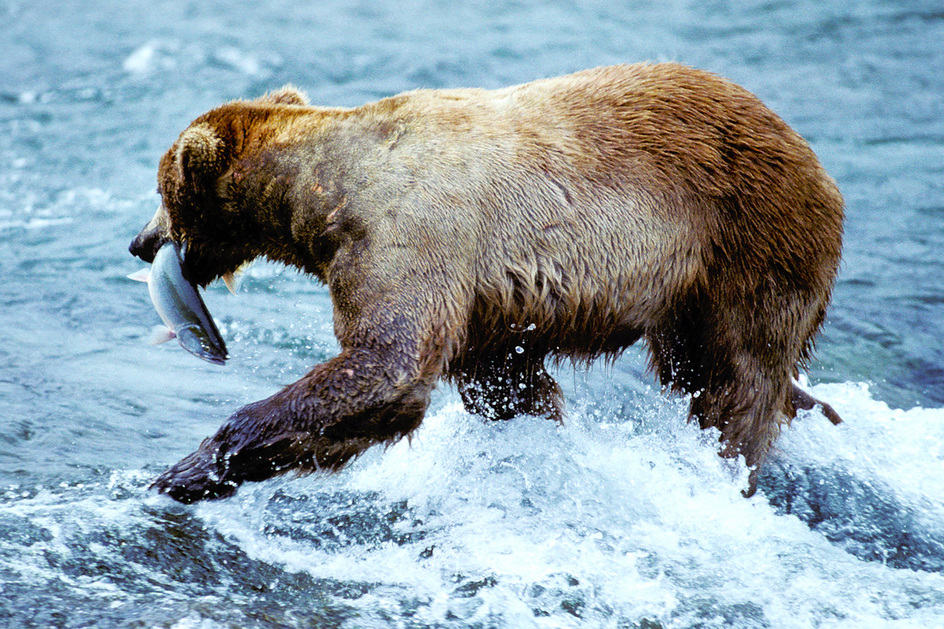 My second trip to Katmai was a much different experience than my previous visit. I was unable to make my own arrangements to visit the park as Brooks Lodge is booked up to two years in advance and the campground was fully booked for the peak periods within hours of the office's opening. As deadlines were approaching for this book I contacted Jo Van Os Photo Safaris and joined one of their groups.

On July second, Al Maclean and I joined ten other bear-photographers along with two Van Os professional photographers, Mike Lacey and Tim Daly, in Anchorage. The next day we flew into King Salmon by scheduled aircraft, about an hour flight. From King Salmon we took the twenty minute flight by float plane into Brooks Lodge where we stay our allotted three nights.(In order to accommodate as many anglers and bear viewers as possible, Katmailand Inc., restricts visitors to three nights at Brooks Lodge. Campers can stay as long as they can reserve space for.)

Our group consisted of eight men and four women. We were four to a room, all grouped by gender. Husbands and wives were separated due to space restraints. (Couples travelling to Brook's Lodge should note that if you wish to share the same room you must link up with another couple willing to bunk in with you.) Our group got along well. Some had come, like me, just to photograph bears, others had come to sightsee or to fish. The tour leaders accommodated our wishes within park guidelines. When we got off the plane those park rules were spelled out clearly by a park ranger. The fishing rules were pretty much the same; one fish per day, bag it and take it to the cleaning station as soon as you've landed it.


Rules for bear photography were tighter. We had to stay at least fifty yards from a single bear and one hundred yards from two or more bears. This last rule really referred to sows with cubs which it turned out were rather common around the lodge and the beach front. Sows prefer to be near the lodge because the boars aren't usually found there in July. The big males stake out the best fishing spots up by the falls and they will kill and eat cubs if they can catch them. In the Brooks area, it is not uncommon for a sow to see her litter of three dwindle in two years to one surviving cub. Park authorities are concerned that cubs which are constantly exposed to people around the lodge and campsite may become too habituated to humans. To prevent that from happening the 100 yard rule is strictly enforced in the hopes that the youngsters will not come to think of people as a source of food.

So far it seems to be working. The only bear that they've had to destroy was the sow who came after us when we canoed by back in 1982. She was shot in 1983 after continuing to display ever increasing aggression towards visitors. The trip in 1982 was in the late summer.

In 1994 it was in early July and timed to coincide with the arrival of the sockeye salmon run. The two best times to see bears at Brooks are in early July when the salmon run begins and in early September when the bears are feasting on the dead salmon that line the bank. The salmon were late in 1994. Instead of seeing a river packed with thousands we saw only hundreds.

The salmon fishery is so efficient that virtually no salmon get through from the ocean to the river when the commercial boats are out. Commercial closures are enforced to allow the fish to make it to the river to spawn in order to maintain the fishery. We were told that 250 000 salmon were on their way. They just started to arrive on our last day there. Fortunately the bears didn't know this and they were everywhere.

I think I photographed twenty-two different animals in three intense days of shooting. I would start my morning with the mile and half hike to the falls and shoot the bears there until the crowds arrived and rangers started asking anyone who had been there over an hour to make room for new arrivals. Then I'd hike back to the viewing platform by the pontoon bridge and shoot there until lunch. After lunch I'd reverse the order arriving at the falls around four as the fly-in visitors left. Supper at six and then back to the falls for a couple of hours when few people were there.

In the evening we saw up to seven bears at time at the falls. The falls are the attraction in July because that is where the big boars are, waiting to catch a jumping salmon in their jaws. This is, of course, the classic Brooks Falls picture and like everyone I hoped to add it to my collection. I imagine it is a pretty easy photo to get when the salmon are there in great numbers. I did manage to get one shot but it was due more to luck and patience then anything that I succeeded.

We saw many examples of social interaction among the boars including two fights and several chases. Once a sow with two year old cubs came in and they put on quite a show too. My fondest memories though are of the last half mile walk to the platform. This walk is through dense forest riddled with bear trails. Around every bend there might be a bear. A few times there were. Imagine being alone and confronting a thousand pound brown bear!

When it happened we'd get off the trail and allow the bear to pass. The fifty yard rule hardly applied in such situations! Never run. We took care to talk loudly as we hiked the trail so that the bears new we were coming. While the bears at the falls were spectacular, the beach front and the mouth of the river provided a different type of shooting. Here we saw three or four sows with young cubs as well as sub-adult males not yet ready to take their places at the falls.


Have the changes since my last visit in 1982 improved the prospects of bear viewing? Over all I'd say they have. It is true that there is less freedom to manoeuvre but the viewing platforms are located in areas where bears will pass as close as ten feet from you. They are also located in areas where bear activity is high. In August '82 my visit fell at a time when the bears are just beginning to return to the area. I saw six then. I'm told that in late August-early September twenty or more are likely. Do not come to see bears in mid-July through to mid-August, they seek the fish in other streams. As for the tour group, I'd highly recommend it. I found the Van Os leaders to be helpful, informative and friendly. They allowed me freedom while providing others with in depth advice. Accommodations were rustic but well kept. I'll do it again.

​
​
​
All images  and text are copyright © 2016 J.D. Taylor Senses of Wildness Inc. These images may not be used in any form without permission. All rights reserved.