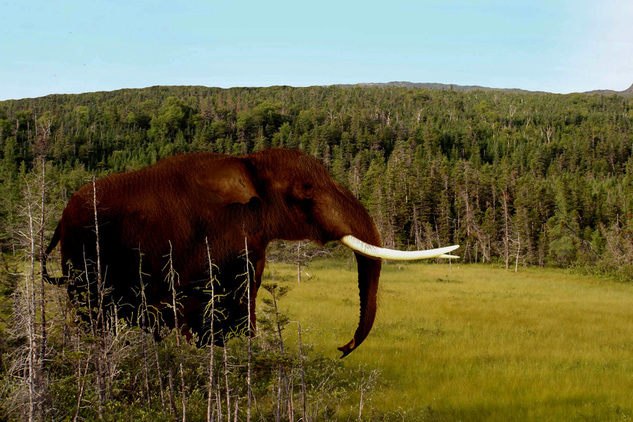 Unlike the mammoths, the mastodon was a creature of the forest. It to is an American species without a counterpart in the old world. It had the greatest range of any American elephant species, ranging from Alaska to Mexico, and from California to Florida. It was apparently fairly common in Florida and along the Atlantic coast where its fossils are frequently found even today. Its fossils are sometimes dredged up by fishing trawlers along the continental coast. Some of these were found over 320 kilometers off the present day shoreline (200 miles). These finds are an indication of just how much the American land mass expanded during the last ice age.

In Ontario and Michigan there are numerous finds of this species’ fossil remains, however Michigan has them in much greater abundance. Ontario has at least 61 sites but Michigan has more than triple that number. There is some evidence to suggest that in southern Michigan mastodons were attracted to salt seeps. It is intriguing to imagine these great animals migrating across Ohio and Ontario (and other surrounding states and provinces) in order to replace needed nutrients form the salt licks.

Much smaller than the Columbian mammoth, the mastodon stood between 2.5 and 3.1 meters at the shoulder (8 to 10 Feet). It weighed between 4 and 6 tonnes. Unlike the mammoth species, mastodons had no dome on their forehead. They were in fact very distant relatives of mammoths, as distant as we are say from monkeys. Mastodon tusk were straighter than and not nearly as impressive as those of their larger distant cousins!
Their fossil cheek teeth are easily distinguished from those of either mammoth species. Mastodon molars feature distinctive, cone-like cusps where mammoths (and living elephants) have flat, ridged molars that resemble washboards. The mastodon’s unusual cusped teeth gave rise to its species name: “mastos” for breast (which the cusps somewhat resemble) and “odont” for tooth. These were teeth designed for its tough food.
​
An elephant of the forest it appears to have preferred spruce woodlands and forests, and open pine forests in the northeast and forested valleys, lowlands and swamps in the south. Food remains identified in its teeth and rib cages indicate a preference for twigs, conifers cones, leaves, tough grasses, sedges, cattails and other marsh plants and even moss. Its shorter tusks were likely used to help strip bark from trees.
Like other elephants males were larger than females and this suggests a social system similar to living elephants (see above).

​Note: This material is from an unpublished manuscript.. 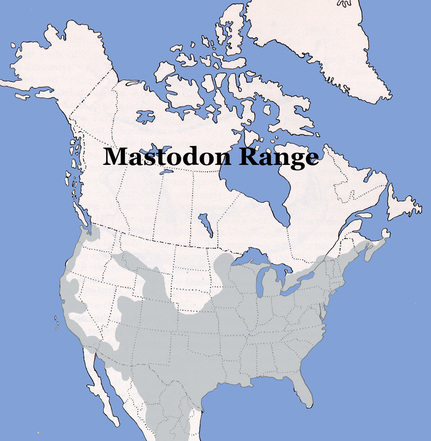