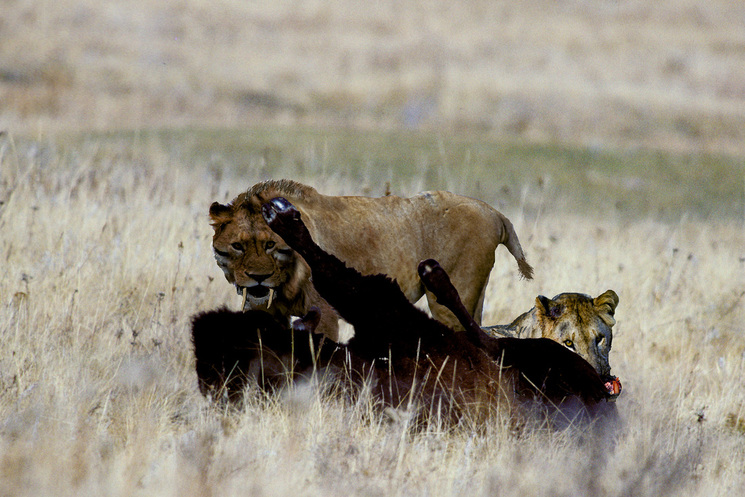 The sabre-tooth cat or smildon is one of the best known of all of the ice-age animals. Thousands of its bones have been found at the La Brea Tar Pits where it came to feed on giant ground sloths, bison and other animals trapped in the sticky glue-like tar. Apparently many of the cats also became trapped and suffered the same fate. Thanks to the preservative qualities of the tar scientists have been able to collect numerous specimens of this cat and have been able to piece together a picture of its life style.

Most members of the cat family are fairly solidarity unless they have cubs or are courting. The exception to this is the lion which lives in prides consisting of one to three adult males and several lionesses that are related to each other (sisters, nieces and daughter) and their offspring. It is believed the smildon also was a social cat.

The large sabre-like teeth were used to kill big game. Columbian mammoths, horses, ground sloths, bison, elk and other large herbivores were all preyed upon. Just how the teeth were employed is a matter of conjecture. They may have been used as stabbing devices to penetrate the brain of a large prey animal or they may have been employed as knives to slide the jugular vein of the victim. Perhaps their use depended on the size, age and species of the hunted animal.

There is no doubt that the sabre-toothed cat was a specialist in big game animals and once these animals vanished it could not survive on the species that filled in the empty niches perhaps because they smaller, faster or smarter.

Smildon was about the same size as a modern lion but had a bobbed tail, Unlike the lion its front legs were shorter and more robust. His suggests that unlike the lion it sought prey much bigger than itself Its skeleton was built for power and not speed which means it was an ambush hunter rather than a stalker.

In the pursuit of prey injuries were common and yet sometimes even severe injuries showed healing. This suggests that the cats were looked after by other members of their group. Many fossil shoulder bones of these cats show signs of healed wounds inflicted by the teeth of rival smildons, another indication that the cats were social creatures.
​
There is no evidence that these animals were hunted by humans. No wonder! 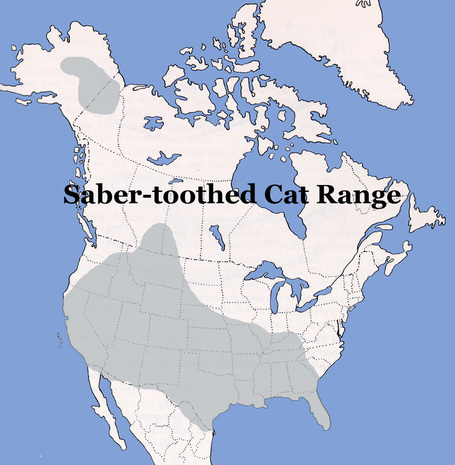