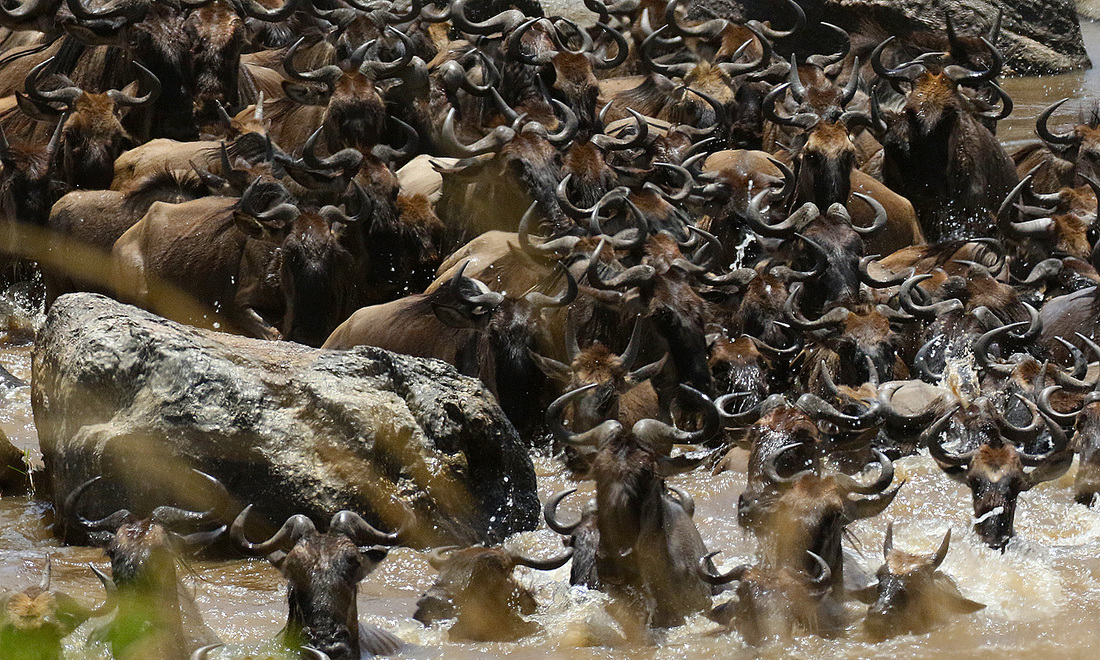 I have just returned from guiding a safari in Tanzania. The opportunity to see exceptional sights was, as usual on the Northern circuit, a given. We visited the following locations: Tarangire National Park, Lake Manyara N.P., Serengeti N.P. and Ngorongoro Crater. It was 10 days in a wildlife paradise.

But having the opportunities to take dramatic images and actually getting them are two sides of the same coin. Like all of my trips, whether or not I am taking people or just doing it myself the experience begins months and sometimes years before the trip actually takes place. First there must be a reason to go there. How you or I discover what that raison d'être is, well, that is a matter of many factors. Maybe the idea comes from a travel magazine, a documentary on TV, an ad or we know somebody who has been and had a fabulous experience.

But having discovered something that attracts you to a place is just the first step. In the case of this latest trip to Tanzania one of the main reasons for both my clients and myself was the opportunity to see a large herd of wildebeest crossing the Mara River. When does this happen? Answering that takes you to step two. Research.

Whether you are taking an exotic trip or doing some photography around home the timing of the event is important. Take Monarch butterflies as an example. If you asked me when is the best time of the year to photograph them at Riverwood, I would tell you September. I know this because for the last 10 years or so I’ve observed that this is when they migrate thorough this area. But if you want to see them by the thousands at Point Pelee, well I would need to do some research in order to give you an educated guess.

And, point three, it is at best an educated guess. Nature runs on a sort of schedule but there are so many variables that it is difficult to be precise. Again let’s take an annual fall event at Riverwood as an example. The Credit River is known for its salmon run each fall and in general we can state with some certainty that late September and early October are the best times. But that is an average prediction based on years of photographing the fish. The actual timing hinges on several factors; water depth, the water temperature, feeding patterns in the Great Lakes and most importantly heavy rainfall. It the rains are heavy in early September expect the run to be early.

Now imagine you are going pay several thousand dollars and spent several days travelling to get to an event on another continent. You know that in September the wildebeest are suppose be begin their return journey from the northern extreme of their migration to the rich short grasses 300 kilometers to the south. You’ve done your research, you’ve read the books, talked to the experts and you have spent your money.

You’ve selected your lenses. You’ve figured out how to charge your batteries where there may not be an electricity and you’ve done all your homework. Great. Good on you mate!

But hold on. It is an El Nino year. Are the rains early or late? Have the herds stayed further north in Kenya or are they already well south of the Mara River? Well it is too late to second guess because you are on a safari and you can only do so much to insure success.

And boy did things look like they were not going to work out for my little group. A severe drought in the south and ample rain in the north looked like it might delay the southern migration. The drive was three or four long hours more than I’d thought. Just getting there was a bit of a trial (we should have flown!).
But the drive had some great wildlife along it and the trip was worth it so no real complaints. The real challenge came when we got there. It turns out that there are numerous crossing places. Now to put this into perspective let’s go back to those monarchs are Riverwood. I told you when they would be there but I did not tell you where they would be. No big deal, Riverwood is only 60 plus hectares and you know to check out the gardens. But if you go to Point Pelee you need to know which tree they will roost in and that is a bit more challenging.

We had 30 kilometers or more of the Mara River to search and unusual for Tanzania, the local guides employed by the camp were not on the radio telling the outside guides where to go. We were looking in the wrong place!

In the end we asked the right questions and found the crossing place (#7 if you must know) and things worked out pretty well. Step four. Keep digging and asking questions. Listen to what others tell you and then act as quickly as you can.

Step five? Everything is there. The river, 1000’s of wildebeest, hippos, crocs, and oh yes 30 other vehicles vying for the best position. Do you know your equipment well enough to get the shots? Now it is up to you.

​The Art and Science of Nature Photography course details
All images  and text are copyright © 2016 J.D. Taylor Senses of Wildness Inc. These images may not be used in any form without permission. All rights reserved.